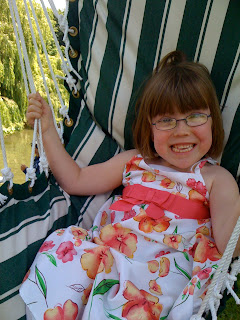 Is swinging in a hammock tied to a tree by a river with your sister! 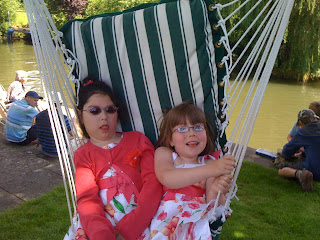 Housegroup barbecue today. A summer social, and a chance to say goodbye to friends who are moving away.

About eight years ago, I was walking through our shopping precinct with Goldie. Goldie was doing her usual "I'm excited about the possibility of eating a burger" thing; squealing and rocking and waving her hands up above her face, grinning and giggling, and generally being loud.

A few shops up from us, a little boy stopped. "LOOK, Mummy!" he shouted, pointing at Goldie. His mum looked, embarrassed, wondering what her son was going to say, as he chatted on at the top of his voice. She held his arm and encouraged him towards their next shop, but he turned around anyway - "no LOOK, Mummy! There is MY FRIEND!"

He's a bigger boy now, and he's moving away, with the rest of his family. On to new schools, new lives, new friendships. And I'm sure he'd be dreadfully embarrassed to be reminded of his three year old self. But he won't be forgotten.

Excellent! It reminds mne of another story by Inky Ed.

Daddy and son are out for a walk and a little boy cycles past on his bike and shouts "Look!"

Daddy wonders what the little boy will say about his son this time, with dread.


for the real thing go here