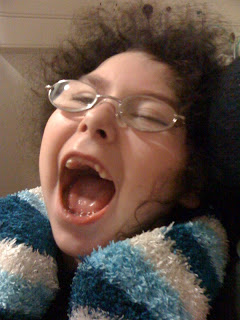 Mog earlier this evening, deciding hospital wasn't necessarily the worst thing ever. Of course that was before Little Fish got to go home with Grannie, and Mog got to stay here with me and be pumped full of IV antibiotics. She's now in bed beside me and grizzling her way to sleep.

Mog has been hot and sweaty today, a mild fever and pouring dribble - but not drowning in it. No longer hooked up to monitors or oxygen, we escaped the ward on several occasions for coffee and lunch and other diversions. All diversions welcomed, frankly.

Current thinking is that we'll be here for the weekend at least, the doctors want her to see respiratory and neurology type people to get an idea for what's happening. She has been very stiff today after all the recent floppiness. Somewhere surely there must be a balance. She's keeping her sats up nicely during the day (as long as we switch the monitor off as soon as she's hit 98 and before it can drop again), but she's been showing people what she can do when she's asleep - I thought 66% was a record on HDU but last night she managed 55%. We'd all be happy for her not to repeat that, or at least not except in front of exactly the right medic to sort it out. So she's hooked up to a monitor again tonight and we'll see what she has in store for us.

Having stopped crying, she's now settling beautifully with a nice neat 96 for pulse and o2 both - very symmetrical. I know it's not just about the numbers, and in fact I'm nicely settled in a spot where I can't see the monitor unless I get up which is handy. But I am so relieved that finally she's shown the doctors what she can do - it's been quite a lonely spot here, trying to convince people against the evidence of the sleep studies.

I'm glad Mog seems better, and that you managed to escape for a bit (lost count of the number of hours I've spent staring over the playing field and wishing myself there, so I dread to think how Mog must feel)...not really much to go and look at around there, and the shop prices downstairs seemed typical hospital (i.e. expensive) earlier this week.

:( re: 55%...but it's good that you are (hopefully) in the right place - I hope you get a plan on Monday and Mog is well enough to go home...and that LF is enjoying her time with Grannie.

Bout time wouldn't you say?? :)
Now maybe you can get some handy dandy equipment and O's on that house! ;)

Try to catch you later..
Hugs,
Trina and Jophie

Very relieved that Mog is getting better.

So glad Mog is doing better over all. If she is insistant in setting records in "how low can you go" then I'm also glad you are where you. Praying if she needs to pull such tricks that she will do so at the perfect time with just the right people present, so that the problem can be sorted out!

Thinking of you and Mog as another spastic across the Atlantic :D