Signs of the times

We had a visitor at Guides tonight. 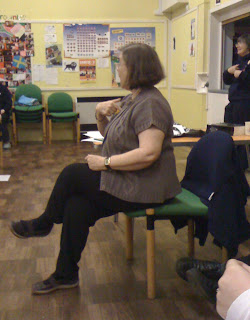 Abandoning her home despite being unwell, she came to teach the girls some Makaton. And they listened.

I've come to the conclusion we are all fairly rubbish Guiders. Our girls mostly come from the same Brownie Packs. In Brownies, they sit, silently, as the leaders talk. They come running to do the leaders' bidding. And they listen.

And then they move up to Guides, and they seem to be under the impression that as long as they avoid direct eye contact with an adult, that adult will remain unaware of the fact they are talking to a friend, sharing iPod earphones, chewing gum, and doing any one of the hundred things which are clearly more important than actually listening to the leaders.

But tonight, they were silent. Stage one Makaton mostly memorised, a dozen extra animals just for fun, songs and I Spy, with our non-verbal Guide in her element checking the other girs' signs and generally making sure everyone knew she already knew what our visitor was teaching.

And the girls listened. Mostly. They stopped chatting and whispering long enough to learn, they stayed silent long enough to practice, they actually managed to look at our visitor and do the things she asked them to do. It was great.

And then R left, and the meeting descended into complete and utter chaos. But then, considering the girls spent the rest of the meeting blindfolded and feeding each other yoghurt, I'm not convinced it could ever have been anything but chaotic.

Thanks, R; they really appreciated it! And so did we.
Tia
Posted by Tia at 21:59

I think it's more an age thing [although I'm impressed that they are quiet and listen as Brownies].

Sounds like a good meeting :) (really need to get involved again since moving).

You're welcome. I had a great time despite sore throat, and it was lovely to see your girls and how well C copes with the whole grown up thing of being a guide. Well done for all your hard work. I'm sure they all appreciate it.
R

Your Guides could be clones of mine !

Perhas we could try makaton sometime - always up for ideas.