Helen House Hospice is something really special. 90% of the annual £4.5 million running costs come through voluntary donations. From large scale corporate sponsorship down to the 50p profit on a second hand t-shirt bought at one of the Hospice Shops, it all goes towards fairly important stuff, like the chance for me to get a decent night's sleep seven nights a year. I'm a fan.

It's not all money though. There are the crafters who donate quilts to be given to the children, a stitched up cuddle to comfort in difficult times. These ones came through our community nurses, but Project Linus and other groups give to the hospice too. And then there are the companies who donate goods. The girls hit it lucky this time; a Disney delivery mid-way through their stay. Boxes and boxes, dressing up clothes, craft stuff, DVDs, toys and games and generally all things Disney. As the care staff took the cardboard Tinkerbells and Frogs to refresh the walls in the sitting room, the girls were allowed to make their own selection from the boxes of delight.

Mog took her own time to decide between a new DVD and a snuggly blanket. She did eventually choose the blanket, which has been worn so constantly it's now waiting by the washing machine, muddy tramlines running across it from where she successfully kicked it off mid-walk yesterday.

And Little Fish? Little Fish's life was completed with the discovery of High School Musical things. 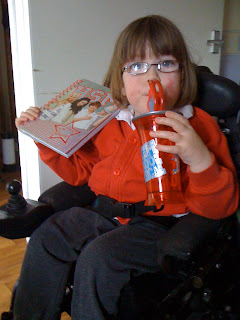 A note book, a drinks cup with a super whirly whizzy straw, just long enough to make it impossible for her to slurp more than the tiniest sip at a time (which is all she's supposed to have); commercial value probably not very much. But value to Little Fish, 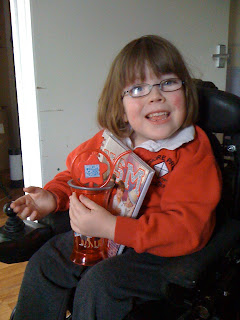 It's a great place, Helen House. But it's also a bit of a scary idea for Little Fish. This is somewhere where Mummy isn't necessarily on hand every two hours to meet all her personal care needs. It's somewhere where new people come and entertain her, and where she has to trust new people again to adjust her mask and do her tube feeds.

But now, it's also a place where people give her the world's best presents. It's a place where a team of staff are on hand to keep her entertained, where there's a messy room just waiting for her to cover it and herself with paint. And if that sounds like bribery, well, perhaps it is. But it's a place where she is beginning to feel safe, somewhere she is beginning to recognise as special for her as well as just special for Mummy. And if it takes bribery by Disney to get that, I'll take it!

Awesome! Hope you and mog are sleeping better. Have been praying.

So pleased Helen House are able to support you - remember when it was built our church youth group raised money for it and visited just before it opened - so lovely to know somebody who is helped by them. Sandra xx