A Pirate's life for me.

School assembly,
Whatever can we be?

The Little Princess/pirate had a line which she has been practicing diligently "We are often older pirates who are not skilled at cooking."

She had consistently refused to explain what the not-skilled-at-cooking pirates do on board ship. And now following a really rather fabulous assembly including dancing and singing and proper uninvasive inclusion, I have the answer.

No prizes, but copious smug points to anyone with the right guess!
Tia 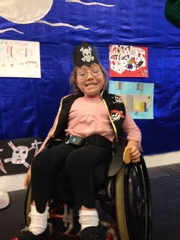