More from Mog and Me

We spend quite a bit of time together, Mog and I, usually when she is unwell and the Little Princess is in school. It's nice, except the her being unwell part; tLP is naturally hugely exuberent and generally manages to ensure most of the attention is firmly fixed on her when she is around. Without her, it's Mog's choice of music, or peaceful silence. Or, of course, the suction machine, the siren song of the SATs monitor, the Grump-hiss of the oxygen concentrator and the steam train breaths of a rather poorly child. But still, it is as a rule a more restful environment when tLP is elsewhere.

tLP and I get our own time together when Miss Mog is in respite, and the dynamics are different again; freed from the necessity to compete we get silly giggly spontaneous expeditions or calm uninterrupted cuddles, and occasionally a swim, although these are trickier to sort out now that swimming lessons are back in session and pools are closed to the public after school. We get to go for walks holding hands, sneak out for fish and chips, or just sit and chat. And always, she likes to phone Mog at respite, and check up with the nurse that all is going well.

But this was a different kind of tLP free day; Mog and I went into Oxford to the Magic Cafe. And as I sat and stuffed myself silly with enjoying a tofu chana daal with cauliflower bhajis, Mog's other Mum entertained us all with a lovely selection of songs. Beautiful singing, a fine pianist, and Mog providing backing vocals where appropriate; a lovely way to spend a lunchtime. Even if the people at the table behind us seemed completely oblivious of the fact the music was live, and determined to talk on ever louder to drown it out. 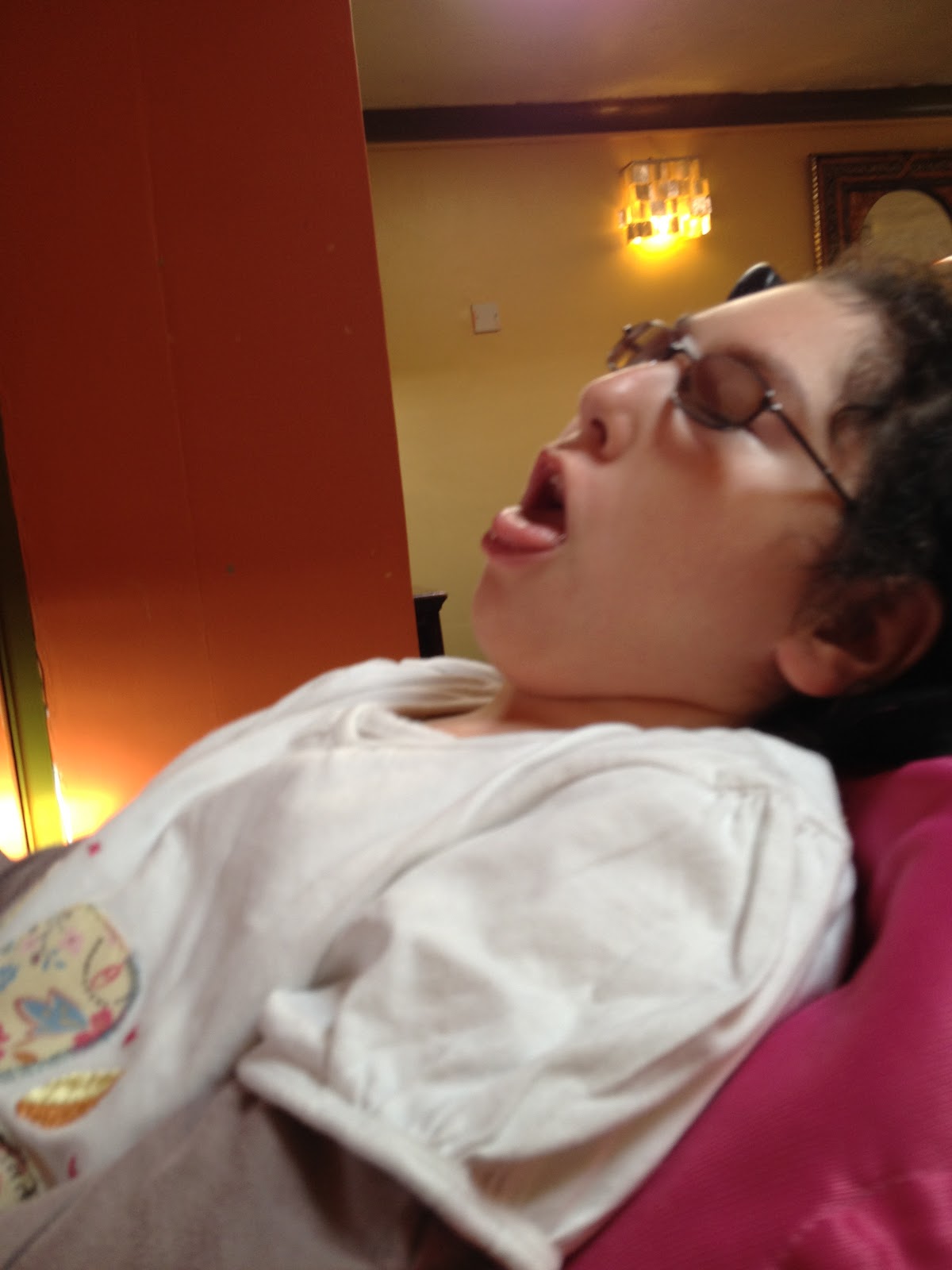 Didn't put Mog off though, although the change of pianist half way through did disconcert her a little.

And then Mog and her other mother went for another music session of a rather different kind, and I had a whole two hours to myself, to be spent pootling along the Cowley Road. Dipping into Oxfam, I found a book I'd been hearing good things about and thinking I ought to read, a copy of Swallows and Amazons, identical to the one I had loaned out several years ago and never had returned, and slotting beautifully into my newly pruned bookshelves beside the rest of the series, and a new Kipper book for tLP. And then the cashier disappeared with my books, returning after five minutes with an apology, and a discount as one had been wrongly priced. Hurrah!

A bit more of a wander, and the shops began to pall, so I slipped away from the traffic and into one of the more peaceful spots on this planet. 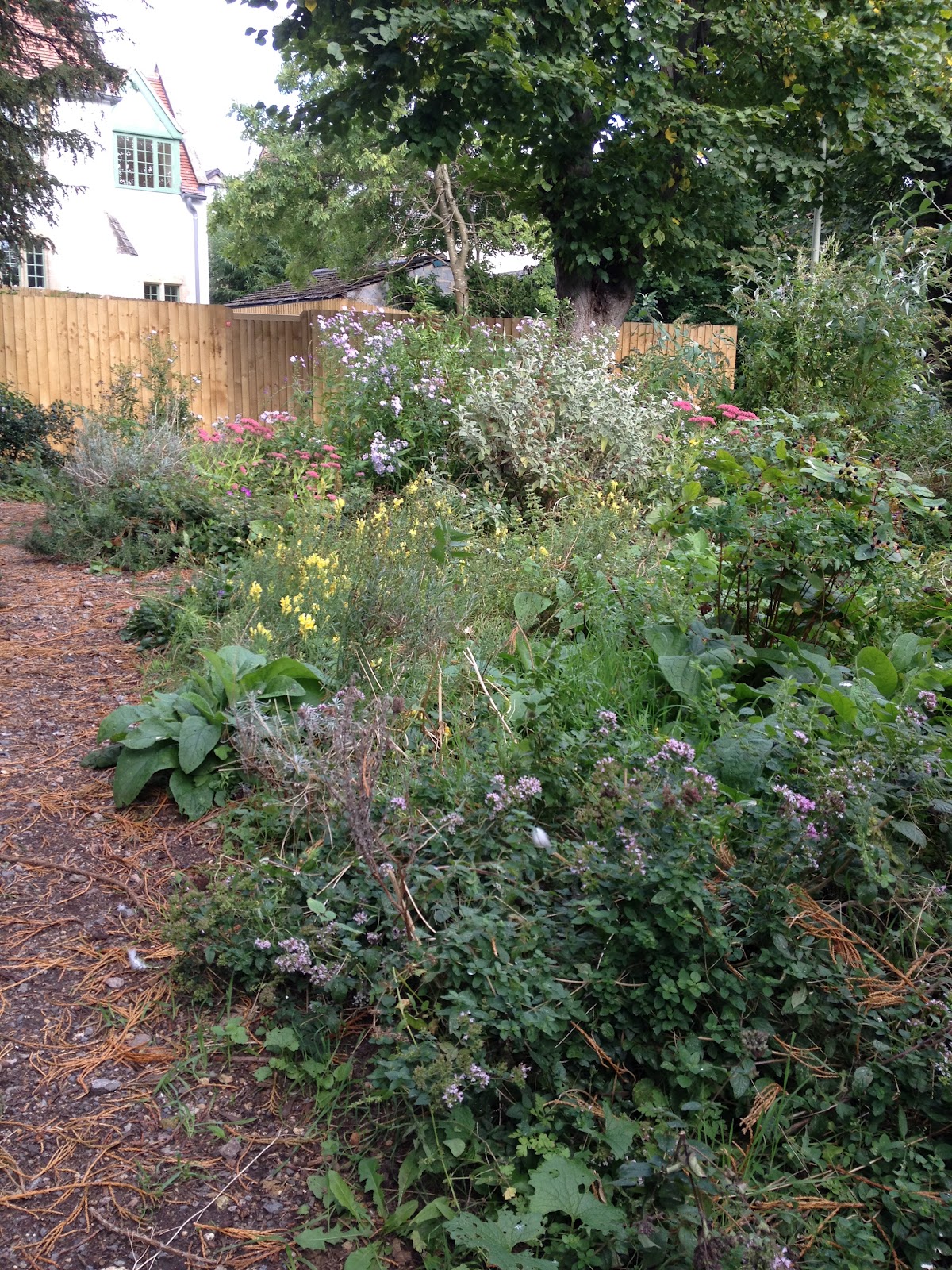 Closely supervised by a very nosy, but very upside down squirrel, I meandered through the churchyard and cemetary 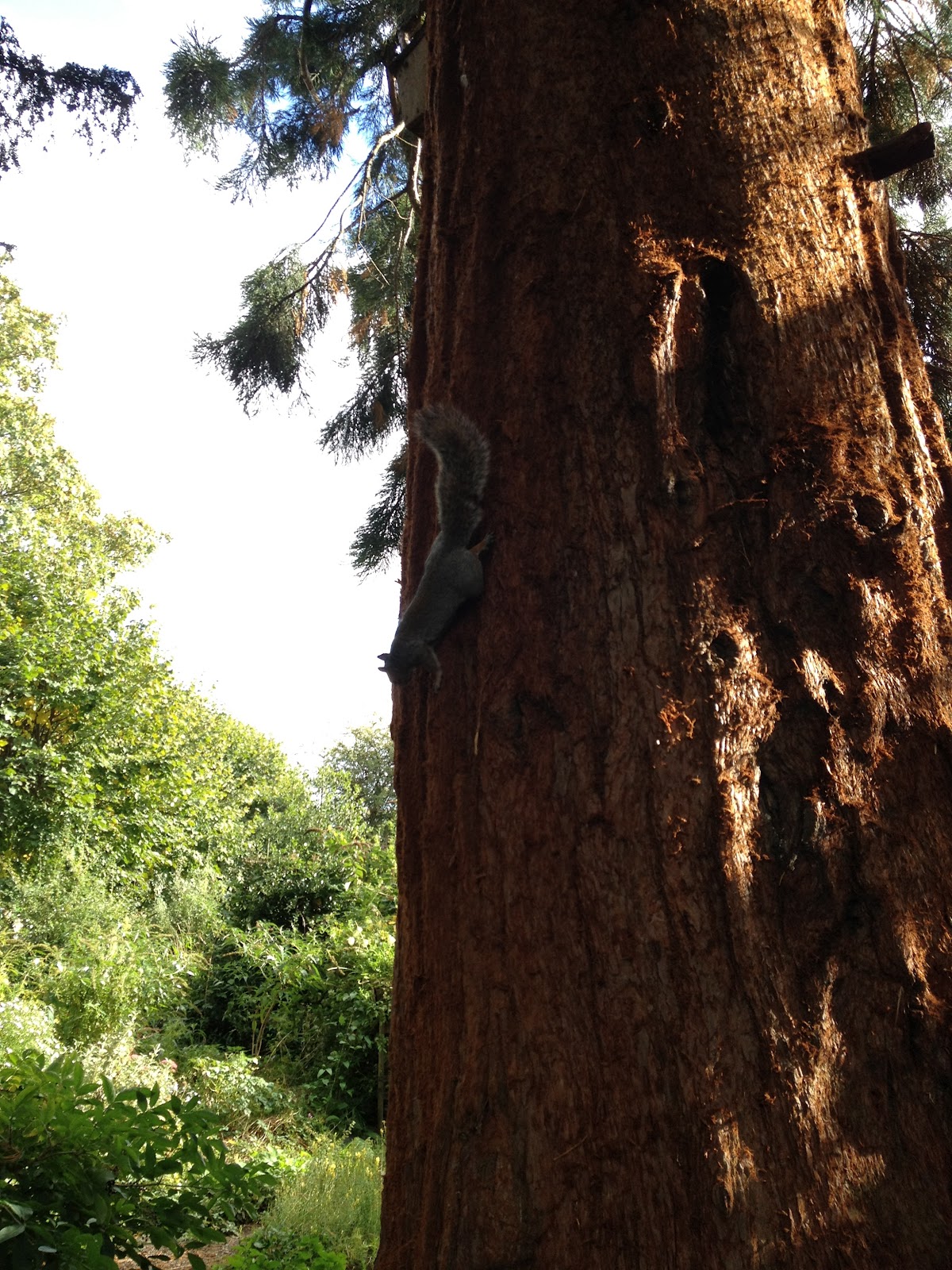 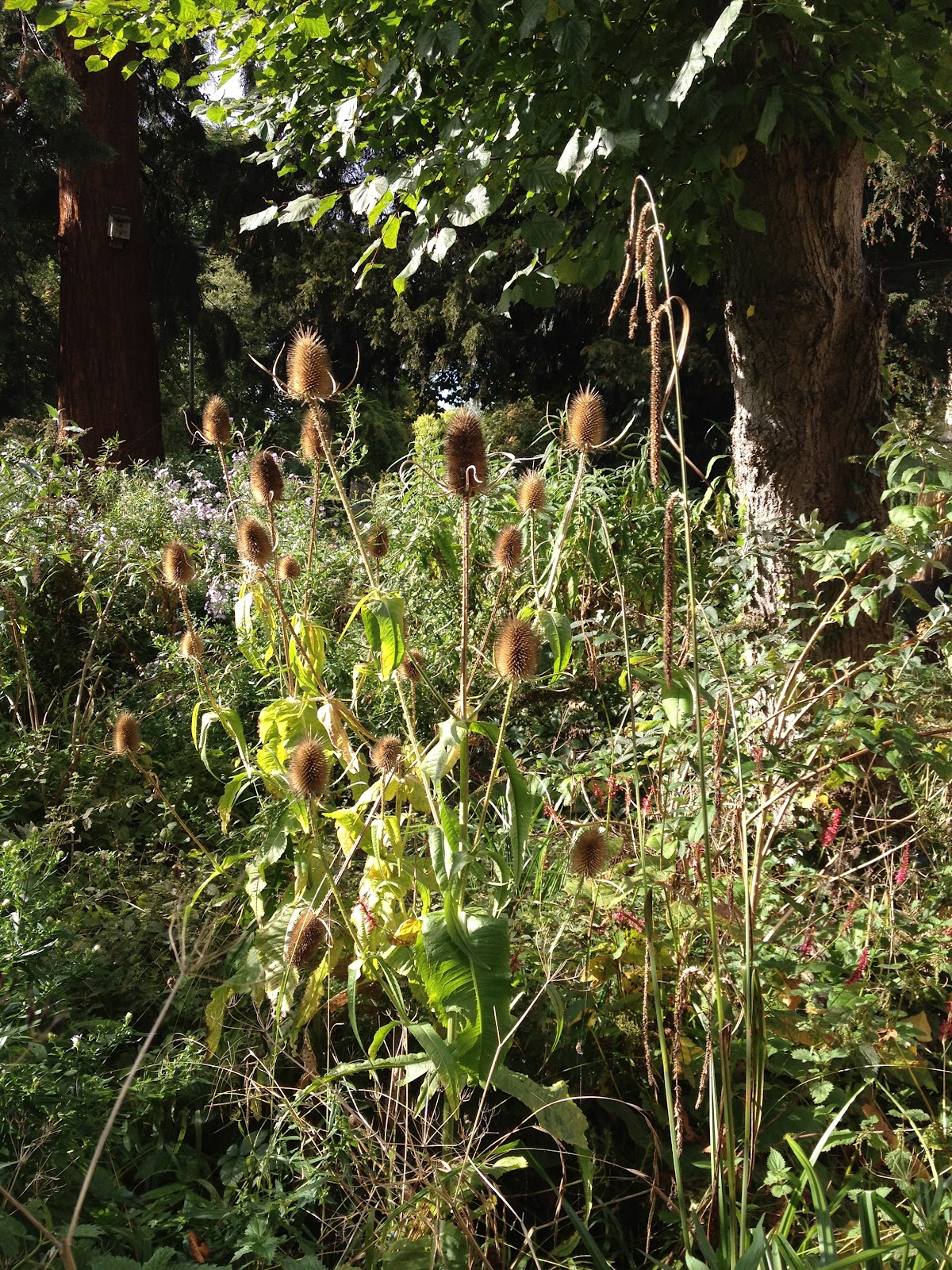 and enjoying the beauty, and the greenness, just a solid brick wall away from the hustle and bustle and fumes of the roadside.

It's an odd place really. Where else would you find four bicycle shops all within a few hundred yards of each other? Twelve different barber shops, cuisine from around the world, little shops selling okra and yams and sharan fruit and rice, university students and staff and young families, two hospices, a couple of convents and some very adult shops and bars, all side by side with this peaceful woodland memorial churchyard and cemetery in the middle?

Old graves and newer graves, beloved husbands and mothers and children. And this: 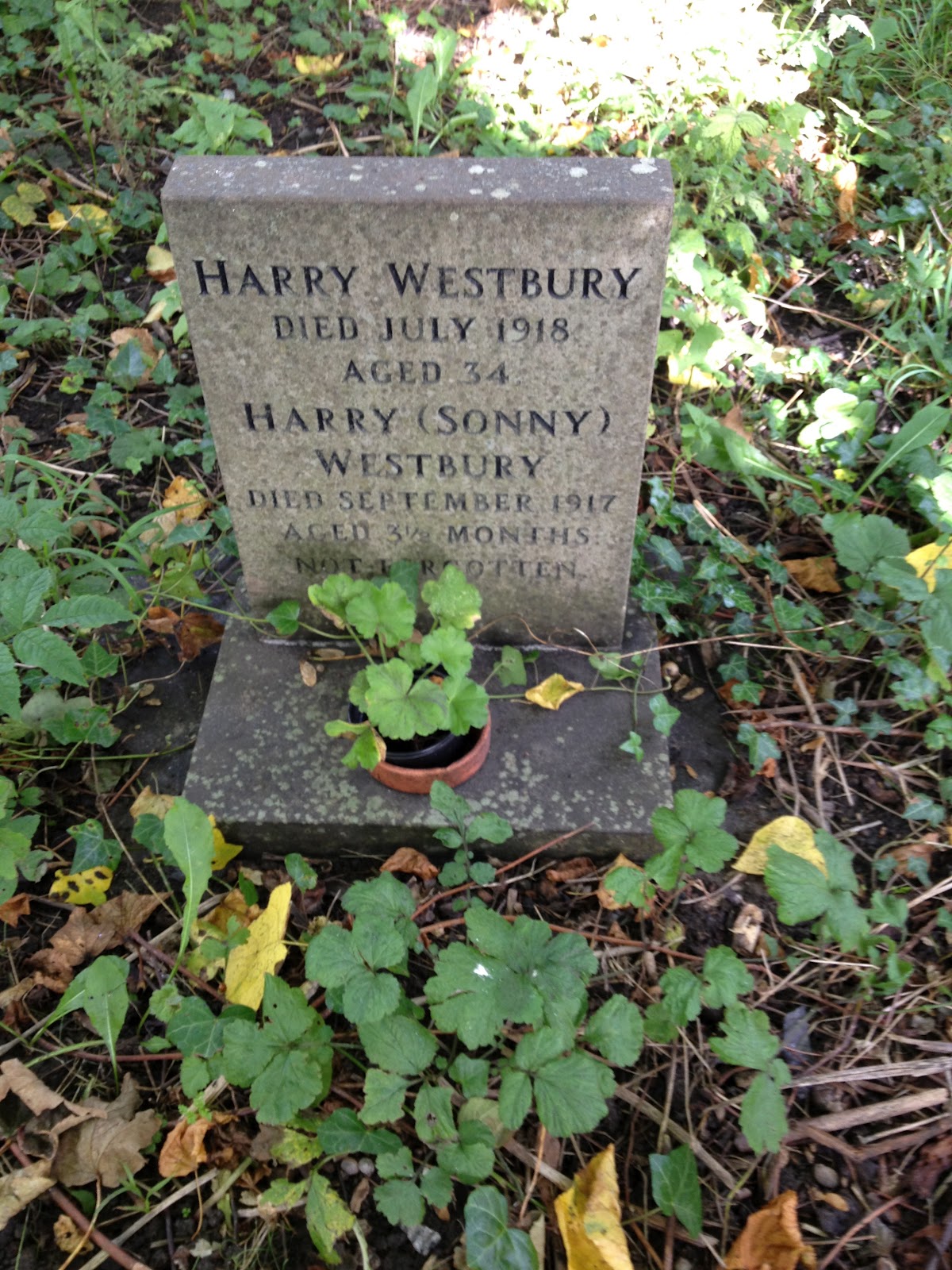 "Not forgotten", says the inscription at the bottom. And, louder than the words, "Not Forgotten" proclaims the geranium clipping newly placed in a neat little pot. Not wife and mother now, but daghter and sister? Brother and son? Two deaths nearly a century ago, and someone still remembers. I hope they have the comfort of hoping for a reconciliation.

And so I think of Goldie. I don't visit her grave; she is not there; it is not a site which has much meaning for me. And it is, in any case, far more important to her other family, and it would only cause extra grief if we were to meet there unexpectedly. There are other places which are far more Goldie-ful than one small slice of earth. We will meet again one day, and what an amazing meeting that will be. Meanwhile I'll catch her echoes along school corridors and in quiet spots at church, in photographs and with friends and in the sudden wave of recollections which wash up,  released by a phrase or an expression or any one of a hundred unexpected things.

So I paused to photograph the marker, and then paused again when I came to write this as to whether I would include it. It is, after all, someone else's story and not my own to tell. So I hope the flower-giver, the rememberer, will forgive any hurt if I have intruded upon his or her grief. And I hope those friends I have to do visit graves - and how can it possibly be that I have more than one set of friends who nurture a too-small grave? - will also understand that I mean no disrespect by not visiting, and cast no criticisms their way either. We just mourn differently.

And then, because life's like that, and because time runs on even when it feels as though it has stopped, I walked back to one of the hospices, collected a happy singing Mog, and drove back home, picking up a very contented Little Princess on the way. And there was tea, and there were bedtime routines, and there was much silliness with the cat, and it was a good day.

We do grieve so differently. My mom (at my aunt's funeral last month) insisted that I touch the body in the casket. She used to insist that I have my picture taken by the casket (of grandparents, in particular). And quite frankly, either one of those things just makes me shudder. Neither one help me; but for my mom, they are important to her coming to terms with the death. I'm so glad we don't have to be the same, even in this area of grief. God is so good to let us be different and to be ok with that.

I'm so glad you had a good day. So glad Mog got her fill of lovely music, too!

Mog's birth family remain a part of her life both legally and socially, so whilst she lives with me, she is in the unusual position of having three parents. We think this is a good thing.